WHAT IS THE LIQUEFIED NATURAL GAS (LNG)?

WHAT IS THE LIQUEFIED NATURAL GAS (LNG)?

Expected to be a new fuel source trend in the green industry, liquefied natural gas (LNG) is a popularly searched name besides gases such as CNG and LPG. So what is LNG and how does it form? Please refer to the article below with DATA Energy.

Liquefied Natural Gas (LNG) is a natural gas (mainly composed of CH4 – Methane 94.3% and a small amount of C2H6) that is cooled at -162°C to convert to liquid. This cooling process reduces the volume by 600 times so LNG is much easier to store and transport.

Natural gas is extracted from various sources such as in gas fields; oil wells are very far from the mainland;… These fields contain a lot of different mixtures and impurities such as methane (CH4), ethane (C2H6), propane (C3H8), butane (C4H10) and even oil and water.

Natural gas will be separated from the above mixture and cleaned of impurities at the gas processing station.

2.2: Liquefaction of gas after being cleaned

After being purified in step 2.1, the natural gas is ready to be liquefied. People direct the gas through the aluminum tube coils of the giant heat exchanger, cooling the gas to -162°C and turning it into a liquid, called liquefied natural gas (LNG).

Liquefied natural gas (LNG) reduces its volume by 600 times compared to NG, which allows LNG to be transported by ship from upstream exploitation to onshore terminals safely and economically. However, to keep the liquid state of LNG, the ship must ensure to have a double-layer hull with insulation to keep the LNG at a low temperature.

2.4: Adjustment and put into use
Once at the terminal, LNG is led into very large tanks. Since liquefied natural gas (LNG) is an odorless gas, an odor addition is required to ensure easy detection of leaks.
There are 2 ways to transport LNG:

LNG is transported by tank trucks to the customer’s plant. They are then loaded directly into the tank at the factory and then passed through the regasification system for production. (Similar to LPG transportation)
LNG is transported by specialized tank trucks, which are both a transport vehicle and an LNG storage tank. At this time, the plant only needs to install an LNG vaporization system for production. (Almost similar to CNG transportation)

According to EIA (Electronic Industries Alliance), countries in the Asia Pacific region and the Middle East are the world’s largest LNG exporters. Northeast Asia is a traditional LNG consumption market with Japan and South Korea being the two largest LNG importers in the world. In addition, LNG is also widely traded in the international market and has become an important energy source for many countries such as the United States, Australia, and the Netherlands. Although, liquefied natural gas (LNG) is not yet widely used in developing countries because of its high investment costs. To exploit and use LNG, we have to spend a large initial cost to invest in infrastructure, machinery and means of transport, but with safe and clean features plus the goal of a clean and safe environment. clean industry in the future, we believe that countries will make efforts to put this gas into use more widely and widely. Are you looking to learn about different types of vaporizers? Are you in need of installing a vaporizer system... read more 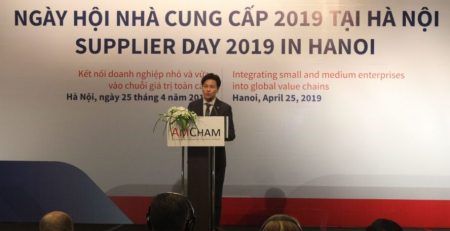 On April 25 in Hanoi, the United States Agency for International Development (USAID), the American Trade Association in Hanoi... read more

PepsiCo Foods Vietnam with more than 10 years of operation in Vietnam, is currently one of the leading food... read more In the face of the trend of green industry development that is gradually becoming popular in countries in Europe,... read more